The first UR+ quality Hero, Mozi, has arrived in Fate of the Empress. Meixin believes you can't wait to deploy him into the battles! Come and learn more about this new hero along with me~ 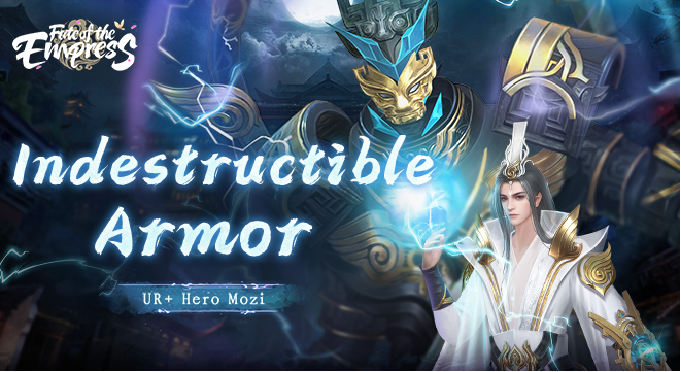 Mozi, a philosopher, scientist and statesman during the Warring States period, created several scientific education theories with the concept of Universal Love. In the world of Fate of the Empress, he turns into a UR+ Scholar, making good use of contraption and phantoms, which can inflict huge group damage on the enemy in battle. 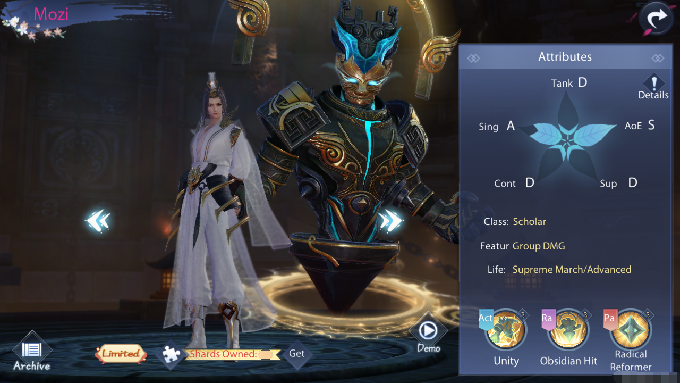 Unity: Summon phantoms to deal DMG to 3 enemies and attach contraptions on them. (When exploded, deal DMG to all enemies. Contraption explodes when the enemy it attaches dies.).

Obsidian Hit: Deal DMG to the main target and to all enemies 8 times. Explode the contraption of the target in the end.

Radical Reformer: When being attacked, attach a contraption on the enemy attacker. (When exploded, deal DMG to all enemies. Contraption explodes when the enemy it attaches dies.)

ATK/CRIT/DMG Buff gems can further strengthen Mozi's output damage in battle, while the AGI gem allows Mozi to prioritize the release of skills, set up Contraptions for enemies, quickly lower the HP, and explode the contraption of the target in the end!

As a Scholar, Mozi has relatively poor survivability in battle. Meixin recommends that you can deploy Group Control Heroes such as Guiguzi and Lotus Fairy

to take first control of the enemy and contain their skills' damage. You can also consider deploying Diaochan, utilizing her revival skill as a precaution. Considering the effects of Mozi's Contraption, it is recommended to match with Zhan Zhao, Prince Gao and other heroes with high single damage skills to kill the enemy units with the Contraption, so as to detonate the Contraption more quickly and cause the group damage to all enemies.

With such a powerful damage dealing, Mozi will fight alongside you and explore the world of Fate of the Empress! This is the end of the Hero introduction, for more game information and news, please stay tuned to our official Facebook and website~